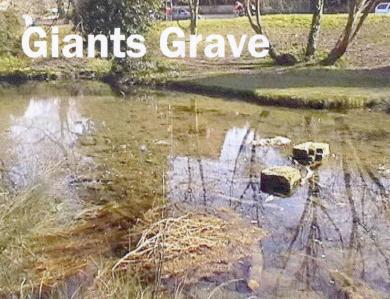 The island in the pool (3) is locally known as Giant’s Grave, it is thought after the giant Gogmagog, which legend says lived nearby, but the name may also have come from some Iron Age burials which were unearthed locally on Lime Kiln Hill, where the skeletons were unusually tall (Cherry Hinton Chronicle, 1854).

This ‘Giant’s Grave’ site is also locally known as ‘The Spring’ or ‘Springhead’ or ‘Robin Hood dip’. It has been given to the local people as a public park since 1941. There used to be watercress growing in the spring.

The photograph to the right shows the remains of a footbridge (2) which disappeared about a century ago and became stepping stones. 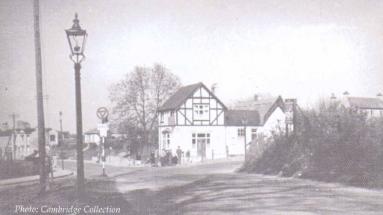 The photograph to the left shows the adjacent crossroads in 1953, and the original public house, which was an extended thatched cottage. This was later demolished, and by 1960 the present building was reopened as the Robin Hood and Little John pub.

An archaeological dig on the site (4) produced a wealth of domestic and building materials from the 19th and 20th centuries including some burnt material, possibly from the demolition of the public house across the road. The site was relandscaped, the road junction widened and the slope surrounding the spring raised and steepened in the 1960’s. 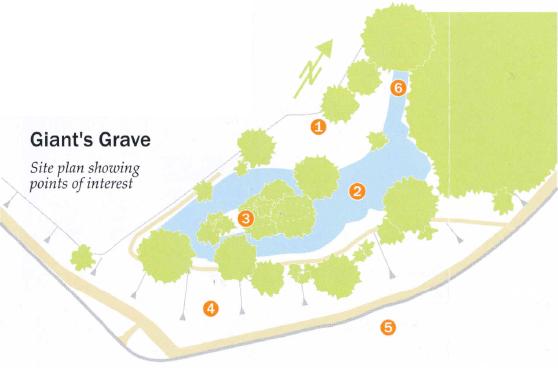 A botanical survey of the site revealed a number of common native plants such as Woody Nightshade, Honeysuckle, Rush, Speedwell and St John’s Wort. Trees include willows and conifers. A number of cultivated species have been planted in the past such as Buddleia, Viburnum and a Ginkgo Biloba tree. In Spring, the site has carpets of daffodils, and cherry trees in blossom. The village sign next to the site (5) depicts the cherry tree from which the village gets its name.

A second archaeological trench was dug (1) and some of the finds are shown in the photographs. Perhaps the most interesting find is a piece of clunch which has been carved. This may be the first artefactual evidence of the medieval stonemasons working in Cherry Hinton on materials for building some of the Cambridge colleges in the 13th to 15th centuries. The other photographs show various pieces of bone, pottery, clay pipe stem and a Scott’s Emulsion bottle. 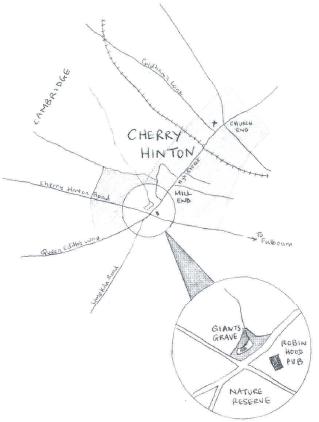 Giant’s Grave is the site of a spring which provided a major water supply for the growing population of Cambridge in the 19th Century. The surrounding land and water supply were bought by the Cambridge University and Town Waterworks Company in 1852, and the exit stream, (6) called Cherry Hinton Brook (see the Friends of Cherry Hinton Brook website at: www.friendsofcherryhintonbrook.org.uk).

Cherry Hinton Brook followed a route past Coldham’s Common to join the Cam north west from the site. A water supply was important for the growth of Cherry Hinton, particularly as a cottage industry in the village was laundering for the colleges. In following years the brook was diverted to feed the ornamental fish ponds built in the grounds of Cherry Hinton Hall, and the plentiful supply was considerably diminished.