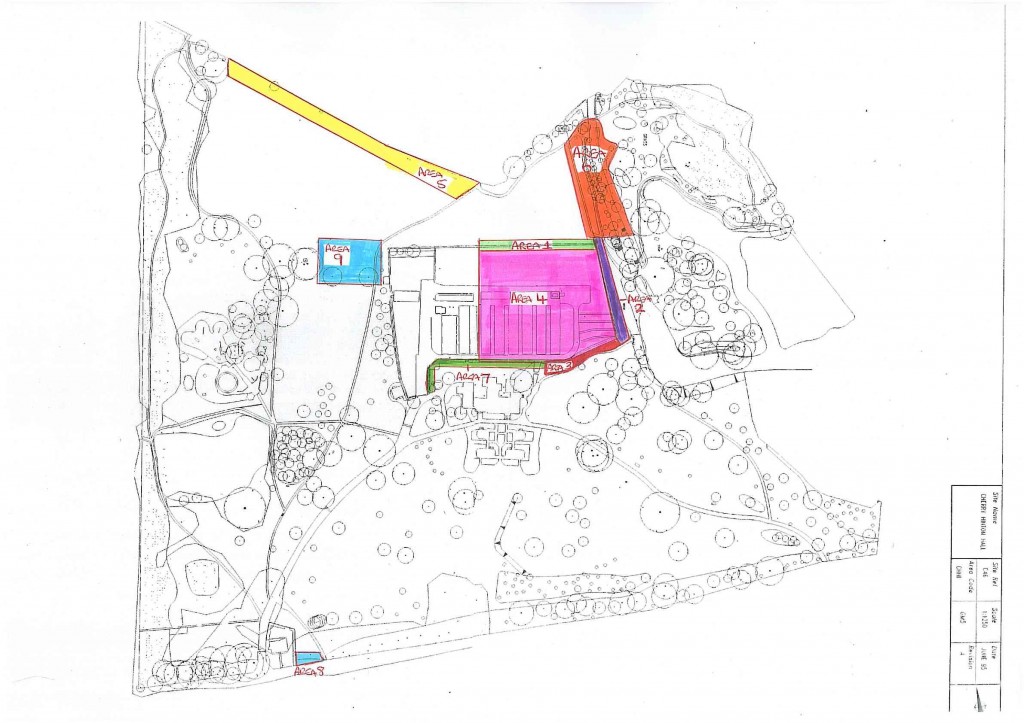 The Cherry Hinton Hall Bulletin is designed to keep visitors to the park informed of any recent, current and up and coming works. It also provides news of any events which may be happening as well as other interesting information about the park.

It has been a while since the last bulletin and during that time there have been significant changes in the hall grounds to start delivering the first part of the master plan.

The first money allocated to the hall was £75,000, funded from section 106 developer contributions. This specifically had to be spent on landscape improvements.

Work commenced in late February this year and to date the following works have been completed;

The removal of the green wrought iron fencing, privet hedge and other vegetation along the perimeter of the former propagation site.

After removal the central area was cultivated, re-graded, and seeded.

Some of the roadway closest to the hall and the large concrete pad in the centre have been retained at present and act as a route towards the lake to enable maintenance to be carried out without unnecessary movements on the grass.

A majority of the green fencing removed from the perimeter has been re-used to separate the public area from the service area/compound used by Cambridge City Council.

It was anticipated that the central area would be available for the public to access after the Folk Festival in mid-late August.   The wet weather however has enabled optimum growing conditions and exceptional establishment and a decision was taken in early May to remove temporary fencing and allow access much earlier than expected.

Four large Yorkshire boulders have been placed on the main approach routes to the lake area.  These have advisory signs mounted on them requesting dogs to be on a lead beyond the point of placement.  The boulders are a much more subtle feature and improvement to the landscape as opposed to signs mounted on posts.

Street furniture has been replaced/improved along the lake frontage.

Eight large Ash trees and a native hedge have been planted inside the Hall grounds along the Daws Lane boundary.  This is viewed as succession planting as the current vegetation along this stretch is in decline and will ultimately require removal.  In the interim work has been carried out to prune back any overhanging vegetation interfering with the new trees, fallen onto the railings or into the Daws Lane brook.  A new native species hedge has also been put on the inside of the railings.

A mixed species hedge has been removed and vegetation thinned out aligning the brook which runs from the small bridge through to Daws Lane.  This has enabled light levels to be increased into the natural chalk stream and promote biodiversity.

The first stage of the restoration has begun, with locally sourced aggregate placed into the stream to narrow the water course, speed up the flow as well as creating meanders and riffles.  Over time these will naturalise with aquatic and marginal vegetation which will increase the biodiversity.

This work is currently ongoing and will continue in August.

One of the master plan objectives is to open up views of the Hall building (front and rear). In order to achieve this at the rear of the building the large Leylandii trees will be removed during August and replaced with a Beech hedge.

The ivy, which is prominent on the building and is a significant maintenance issue, will also be removed at the same time in order to protect the fabric of the building. In particular this will improve the view of the building at the front. Vegetation to the front of the building will be considered during the 2nd phase of the project.

Tree planting – A large Beech tree near the car park entrance/lodge was removed two years ago and replaced in 2011.  This replacement has unfortunately failed and will be replaced with two new Beech trees in this area shortly.

A pre-application will be submitted to Heritage Lottery Fund during August and officers will meet representatives to discuss the details and requirements of the 2nd phase funding.

The aim of the first phase of the Master plan was to remove existing fence lines and vegetation to create a large open area in the centre of the park.
The work commenced during February 2012 with the original timetable scheduling public access in this area after the Folk Festival.

The timetable was revised to allow public access to the new area ahead of schedule due to a very successful period of establishment.

Other works across the site, as detailed above, have been extremely successful and delivered on time. The project will continue with the removal of the Leylandii during August which will have a huge impact and enable the Victorian Hall building to once again become the prominent feature of this historic landscape.

There is still much to achieve in the next few years at Cherry Hinton Hall and subject to a successful Heritage Lottery bid officers and key stakeholders will be able to look at the original Master plan to shape and add the finer details of the new features and facilities outlined.