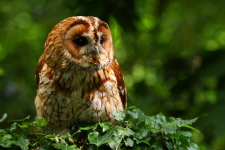 Some of us unfortunately can’t or don’t get over to the Hall as much as we would like. But if you live close enough then you still benefit from the Hall in many ways by being “on the Fringe”of the wildlife.

How? The wildlife that lives in the grounds sometimes comes out to your garden! I have been reminded of this several times recently.

Last week we heard the pair of Tawny owls for the first time in a few weeks early in the evening. Then later that night, while out having a smoke my other half came in rather alarmed. She had just been 5 feet away from one of them which had perched on our garden fence.

Both Jane and the Owl were very surprised, but it got me thinking. I was actually feeding more birds than was initially obvious by just putting out bird seed.

The normal small birds like sparrows, robins, blue tits, etc get the seed you put out. But yeah they are messy and drop loads of stuff on the floor. This attracts the snails and slugs, which then attracts other birds like blackbirds and robins, to eat the little critters. 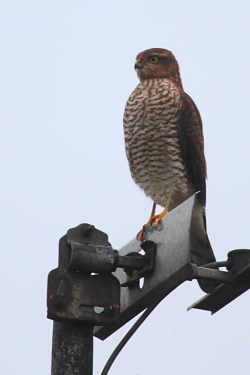 Also at night the Toads and Frogs come to the dinner table and gorge on the slimeys. We even had a common lizard outside the back door on Friday. Hedgehogs then have their fill of everything. We suspect we have mice under the shed too as the cats must sit staring at the bottom of the shed for some reason that is in their interest! Night time, and the Owls are about, presumably looking for the mice and frogs etc. Bats are eating the flying insects. We saw 4 types of bats in the Hall a few weeks ago.

During the day all this activity attracts the local predators like the SparrowHawk. The local female came and sat on an a neighbour’s TV aerial for a good ten minutes yesterday overlooking our garden, while we saw the male flying about also. Presumably the hawk was was try to look like a dove on the aerial waiting for the local birds to come past when it could pounce. We have seen the Sparrowhawk kill in our garden before, and we will see it again.

A couple of weeks ago we saw an altercation between a local ginger tom cat and the local vixen fox. Normally I would have backed the fox. But no the cat was taking no prisoners! Hackles up charging at the fox to get her out of his territory. It worked a treat, the fox was seriously not up for a fight and trotted off quite quickly. Quite an amazing site I can say and made our evening! But normally I would guess the fox would happily be cleaning up the mess we create and maybe munching the frogs and toads too. I was telling a neighbour about the fox and she told me that a Muntjack deer had been seen in St Thomas’s Square the other day too.

So, I am constantly reminded that the wildlife in the Hall does not stay in the hall, we are part of a wildlife corridor in the City and we each keep the natural balance in our local area. Keep feeding the birds and do not keep an immaculately tidy garden!