What a load of Balls! 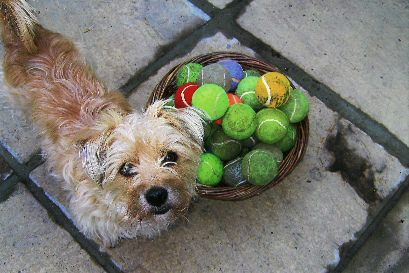 This a photo of Jess and her collection of balls, most of them found in the park.  She is a champion ball finder and usually finds one wherever we happen to be,  Naturally the tennis court is a good place to look, she doesn’t care what kind of condition they are in after all a ball is a ball!  Unfortunately she is very possessive and woe betide any dog who tries to remove one.

Joggers using the park did so at their own risk when Jess was about I don’t know what it was about them but she took great exception to them jogging passed. One man  in particular came in for a lot of barking and posturing but it was all noise not much consolation when you’re trying to have a quiet jog first thing in the morning.

One morning we thought we were the only ones in the park when suddenly someone clapped quite close by, we hadn’t heard him come up and the noise took us by surprise. Jess was furious and never forgot him she seemed to know when he was in the park and although I tried to keep her away she always seemed to know he was there and rush up to him barking furiously. She is a small dog but even so she could be quite intimidating.

Sometime went by and I realised I hadn’t seen him for a while and then I heard from another dog walker that he had changed his route!!!! OOOPS!